Carne asada can be made from other beef cuts, like flank steak (carne asada roughly translates to “roasted beef”).

I hate using the term fajitas because it brings to mind the flavorless, limp piles of meat stuffed into flour tortillas with sliced bell peppers and onions at American chain restaurants.

We’ll stick to the terms arrachera for the skirt steak and carne asada for the cooked beef for these tacos.

The marinade I make for arrachera is very similar to an enchilada sauce. The difference is that it’s much thinner and includes quite a bit of lime juice.

I like to use ancho chile peppers in my marinade (no random chile powder from the store) for their mildly sweet flavor with slightly fruity and earthy undertones. The ancho is a perfect match for adding complexity to the big beefy flavors of the skirt steak.

Since we’re using whole chile peppers, it’ll be necessary to rehydrate them, blend them together with the other ingredients, and make a liquid marinade.

I understand that the soy sauce in the marinade isn’t a traditional Mexican flavor (everything doesn’t have to be traditional), but I believe that soy sauce is a perfect component for a beef marinade. The glutamates in the soy sauce enhance the skirt steak’s flavor, making it taste more “beefy.”

The lime juice functions as a tenderizer, so be careful not to marinate for too long. The acid in the juice can actually over-tenderize the meat and make it feel mushy in your mouth.

Finally, a tool I love to use on skirt steak when I marinade is a Jaccard. It’s is a tenderizing tool that punctures the meat all over with 48 small knives. It helps break up some of the fibers and allows the marinade to more deeply penetrate the meat.

Cooking Your Arrachera – Adding Some Smoke

To add some smoke flavor on a charcoal or a gas grill, all you need is some tin-foil, wood chips, and a fork.

To make a wood-chip foil pack for smoking:

TIP: Some websites suggest that you soak the wood chips in water. This is entirely unnecessary and will only make it more challenging to get your wood chips to burn. Just put them in the foil dry.

Next, you’ll need to know how to set your grill up for two-zone cooking. You can learn how to do that here.

Once your grill is set up for two-zone cooking, throw your wood-chip pack over the hottest part and let it sit with the lid open until smoke starts coming out.

Now that your wood is smoking, throw your arrachera on the cool side of your grill, close the lid, open all the vents, and let it smoke for 10 to 15 minutes.

Once you finish smoking the meat, open the lid back up and move the foil pack off to the side. Your coals will have died down a little bit due to being somewhat smothered with the lid closed. Don’t worry; with the lid off, they’ll get screaming hot again in just a couple of minutes.

Now, move your skirt steak back over the hottest part of the coals and sear it very well. You want little bits of it to be charred, but you don’t want it overcooked.

It’s helpful to have an instant-read thermometer on-hand to check the internal temperature of the meat. When the center of the thickest part of the skirt steak reads 125 degrees, it’s done.

Take it off and let it rest for about five minutes before cutting.

How to Cut Arrachera for Carne Asada

The way you cut your arrachera is far more critical than the Jaccard and marinade for making it tender.

To cut it, you need to identify the direction of the grain, then cut along the grain approximately every three inches. After that, you’ll cut those portions against the grain into thin strips.

If you don’t cut it this way, the meat will end up overly chewy. Cutting like this allows the knife to do all of the work of breaking through the chewy grains in the meat, rather than your jaw muscles.

Making arrachera tacos is really a personal thing. Some people like to pile them high with tons of other flavors and textures, and some like to keep it simple to not drown out the beef’s flavor. I fall into the latter category.

What I like to do to make up for the different approaches of taco assembly is to give everybody plenty of options. I just lay out as many ingredients as I have on hand and let them build their own.

Some good options for toppings include:

The number of toppings are endless, but remember, the arrachera itself is the star of the show. Don’t drown out that rich beef flavor. 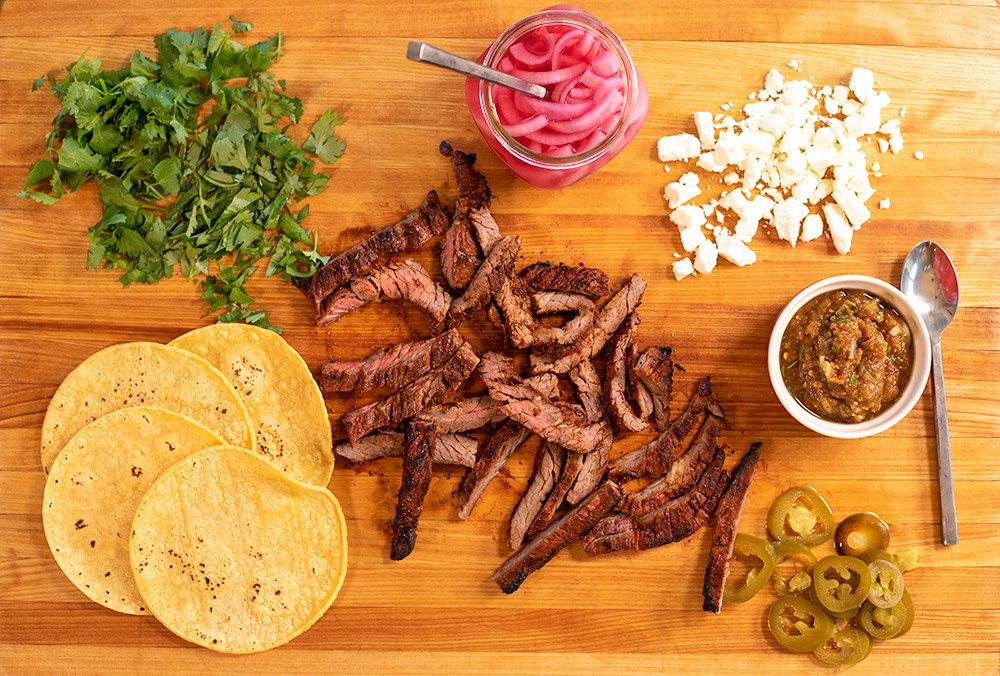