Being from West Texas, beef cheek Barbacoa Norteña (Barbecue from Northern Mexico) is what I’m accustomed to.

Growing up in far West Texas, goat meat was a far more common protein for barbacoa since it was easy to raise yourself in the harsh West Texas climate. Beef wasn’t as common for us since it was more expensive and hard to raise. It wasn’t so uncommon for families that had more money, though.

Now that I live in what passes for the suburbs in West Texas, goats in the backyard are a “no-no.” I generally get my meat at the grocery store, and beef is readily available.

Honestly, it’s been years since I’ve had barbacoa cabrito.

Traditionally, when cooking barbacoa, the meat is wrapped, along with the other ingredients, buried in a hole with some hot coals, then cooked for hours.

The goal of burying your barbacoa is to cook it at a very low temperature for a very long time. Cooking it low and slow like this helps liquefy all of the fat and collagen, without burning the meat. This moistens the meat so that it’s softer than even the tortilla you’ve wrapped it in.

You don’t need to go dig a hole in your backyard to replicate it, though. We’ve got you covered. A Crock-Pot will do just fine.

Depending on where you live, beef cheeks may be hard to come by. If you can’t find them at your regular grocery store, most Mexican grocery stores will have them. If there isn’t one nearby, ask your butcher to order it for you.

Not finding it anywhere? You can substitute goat shoulder, and if you absolutely must, you can use beef chuck.

Beef chuck is just not the same, though. Beef cheeks have a much higher collagen and fat content, which gives them what I would call a sticky, slick texture when cooked.

That “sticky-slickness” is what makes Barbacoa Norteña so great.

Understanding How to Cook Barbacoa Norteña

Why Use a Crock-Pot?

I rarely break out my Crock-Pot to cook. Generally, my cast iron dutch oven works just fine or better. I find that the lower and slower cooking in my Crock-Pot works better for this.

We’re trying to replicate cooking slowly in a pit dug into the ground, so a Crock-Pot is probably our best choice, short of digging a hole in the backyard.

Wrapping the meat tightly in foil helps the meat steam in its own juices, rather than stewing in a bunch of liquid. It concentrates the flavors, rather than diluting them. Pouring water around the foil-wrapped meat and seasonings in the Crock-Pot allows it to heat evenly.

You’ll also notice that there’s quite a bit of salt in this recipe. That’s intentional. The salt is a critical part of tenderizing the meat.

It seems like a lot, and it is, but cheek meat can be tough. We want the extra salt to help break it down.

You’ll also want to give the salt time to work. Letting it dry brine in the refrigerator overnight will help make the meat juicy and succulent when it’s done.

With that being said, not all salt is the same. All of my recipes are developed using Morton’s Coarse Kosher Salt. Different salts have different grain sizes, so should be measured differently.

You don’t need to trim all of the fat off of the meat. Just trim off the large chunks.

By cooking low and slow in a Crock-Pot like that, you’re giving the fat and collagen enough time to completely liquefy.

Be sure to save the trimmed fat for rendering later. Just stick it in a resealable container in the fridge or freezer.

I save mine to make Salsa Borracha Norteña to go along with my barbacoa. It also makes a great base for brown gravy.

To Shred or to Chop

Generally, with barbacoa recipes, you’re told to shred the meat with two forks after it’s done cooking. That’s fine and it works out well after your done, but it’s kind of a pain.

I prefer to just chop it up finely with a sharp knife. It’s faster and comes out just as good.

Just be careful to pull out any bits and pieces of tough cartilage or membrane before you serve it.

Toppings for Your Barbacoa Norteña Tacos

Dress up your barbacoa with some of the authentic toppings below: 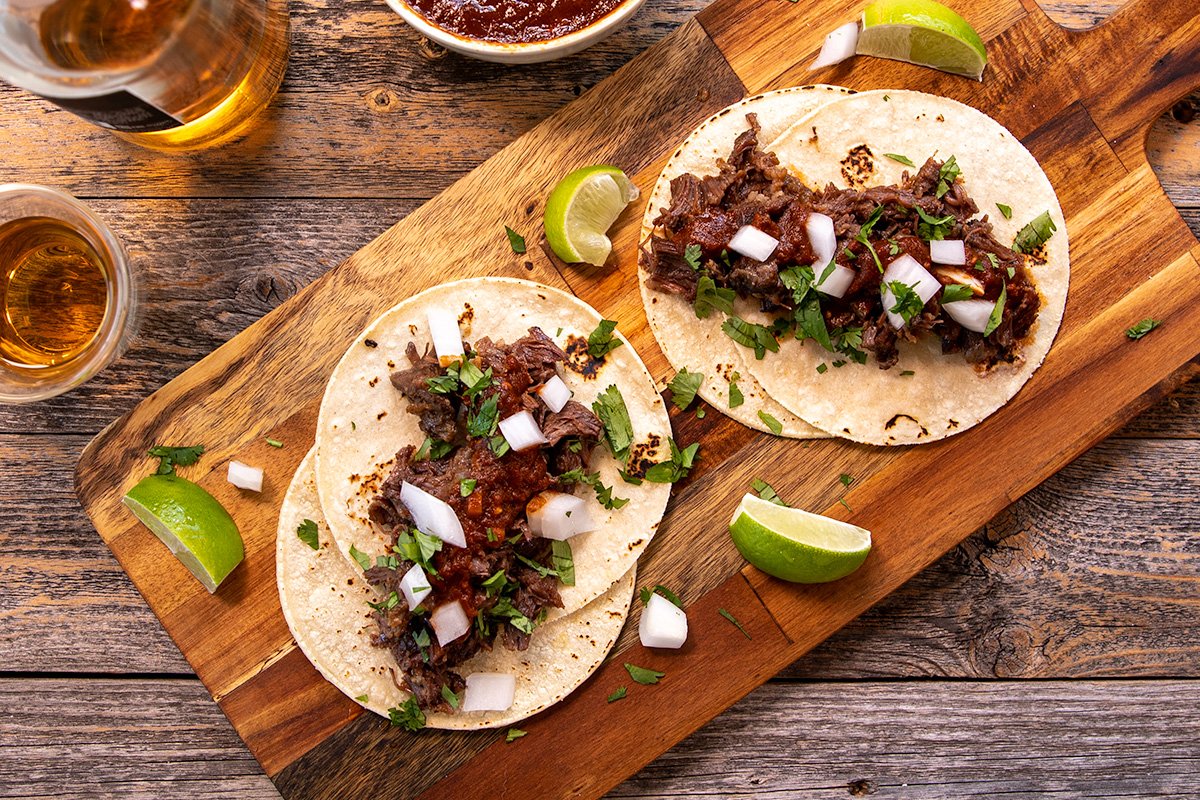 When planning your meal, you should expect that beef cheek meat will reduce in size by a little less than one-half during the cooking process.
Tried this recipe?Let us know how it was!
Share
Pin
Tweet