Growing up, Beef Shepherd’s Pie was a regular meal in my house. My mother made a Tex-Mex version that I loved. It was such a big meal that I could eat until I hurt for dinner, then wake up the following day and have more for breakfast.

One day I’ll work on replicate her version here on Texas Recipe Workbook, but for now, I’m going to share the version I make at home.

This is more of a Southern-style Shepherd’s Pie (or, potentially even English, except I use Shiner Bock instead of Guinness). I am a Texan, after all. I have to use a Texas beer.

The key ingredient for me, in my shepherd’s pie, is fennel. Once we start getting into fall, I start craving it.

Something about fennel hits the spot in the Fall.

This recipe is the first thing I cook when Fall weather hits (in West Texas, Fall is the first day the temperature drops below 90 degrees).

How to Cook Beef Shepherd’s Pie

This recipe is really rather basic. A little bit of chopping and lots of simmering is all there is to it.

The only cooking technique that you really should know to amp it up is how to brown beef, instead of steaming it.

Browning beef creates the Maillard Reaction, which is key to maximizing its flavor.

If you simply throw the beef into a pan, then break it up and stir while it cooks, it steams rather than browning. The released fat, coupled with whatever oil is in the pan, creates a barrier between the meat and the pan.

It turns it gray rather than browning it.

To get ground beef to brown properly, it’s best to start it cooking like you would a hamburger patty.

To do that, get your pan good and hot, then add a little cooking oil to it and swirl it around (don’t use a non-stick pan. Cast iron or stainless/carbon steel works best.)

Next, take your ground beef and smash it into the pan. Let it cook undisturbed for three to four minutes. This will give the beef time to sear.

It’ll stick initially, but that’s okay. Once it starts getting a good sear on it, it should release.

Once you’ve got a good sear on it, break it up with a sturdy spatula and cook it the rest of the way.

It’s a simple technique, but it’ll add an additional layer of flavor that you just can’t get any other way. 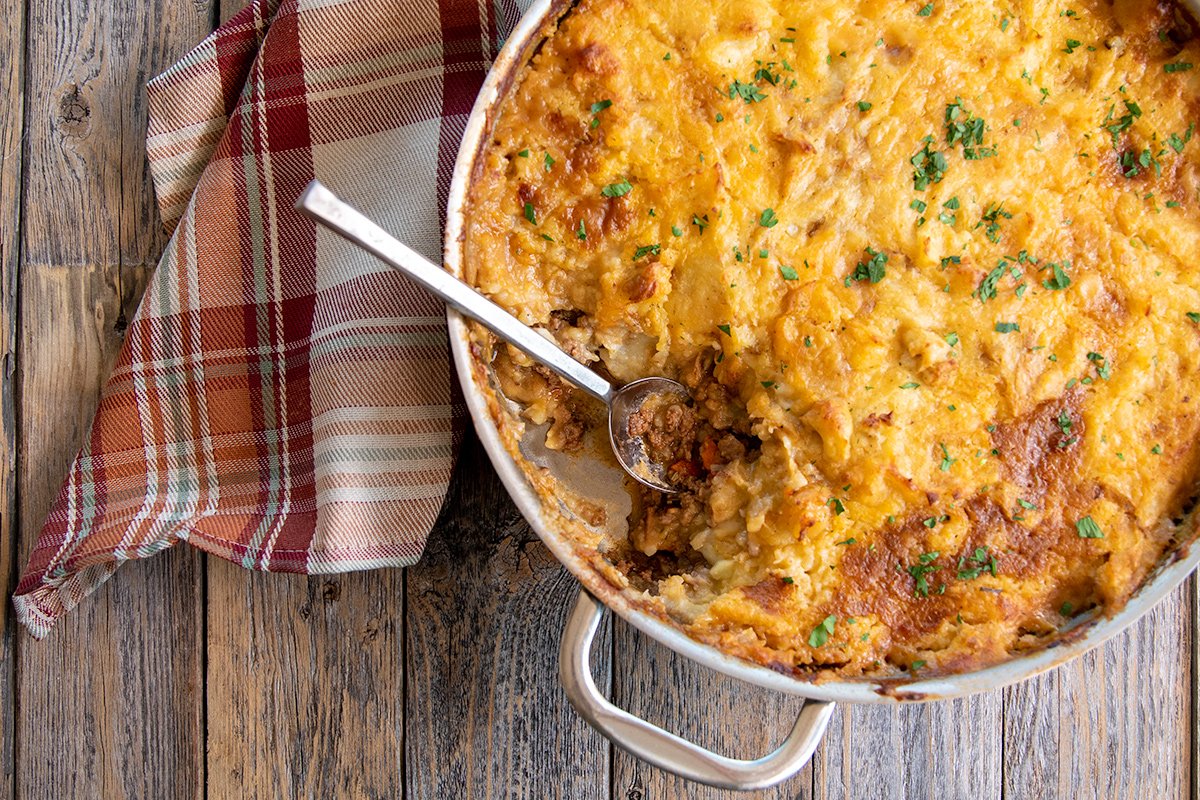 If you don’t have a large saute pan with metal handles, so you can transfer it from the stovetop to the oven, you’ll need to spoon the filling into a 5 qt baking dish, then top with the potatoes prior to transferring to the oven.
Tried this recipe?Let us know how it was!
Share
Pin
Tweet