Cooking biscuits outdoors in a cast iron dutch oven may seem like a challenge, but it’s actually fairly easy. If you’re doing it in your backyard, it’s even easier, since you can put the biscuit dough together in your kitchen and haul the cut biscuits outside to cook.

If you want to make them outside, that’s easy enough with a plastic folding table doubling as your cutting board.

WHEREAS, The State of Texas traditionally has recognized a variety of official state symbols as tangible representations of the proud spirit and heritage of our state; and

WHEREAS, The bluebonnet, the pecan tree, the Guadalupe bass, and the lightning whelk are examples of some natural specimens that serve to symbolize the great diversity of the Texas landscape, while the state dish, chili, fittingly represents another aspect of our shared culture as Texans; and

WHEREAS, In keeping with this custom, the designation of the cast iron Dutch oven as the official State Cooking Implement would provide suitable recognition for this sturdy utensil; and

WHEREAS, A welcome and dependable fixture at campfires across the Lone Star State, the Dutch oven was used extensively by Spanish explorers, early settlers, ranchers, and chuckwagon cooks over the course of Texas’ history; and

WHEREAS, The Dutch oven has also remained a popular item with a vast number of Texans today, and in January, 1995, the Lone Star Dutch Oven Society was founded to promote its use throughout the state; and

WHEREAS, Ideal for use in moist-cooking methods, such as braising and stewing, the Dutch oven’s versatility has made it the food preparation implement of choice of both the Boy Scouts of America and the Girl Scouts of America; and

WHEREAS, Renowned for its portability and durability, the cast iron Dutch oven has been a cooking mainstay of Texans from the time of the pioneers to the current day, and it is indeed appropriate that it receive special legislative recognition for its role in our state’s history and culture; now, therefore, be it

RESOLVED, That the 79th Legislature of the State of Texas hereby designate the cast iron Dutch oven as the official State Cooking Implement.

The key to making good biscuits is to keep the butter that you work into the flour from melting before you cut out your biscuits.

To make this easy, I recommend using a pastry cutter. It’ll keep you from heating the butter up too much with your body heat when you work it into the flour.

Using the pastry cutter, just work the butter into the flour until it takes on a pebbly texture. You don’t want to work it until it’s smooth. You want little pieces of the butter to melt into the biscuit while it cooks. This helps create a flaky texture by leaving small air pockets in the biscuit.

Keep in mind that when you add the buttermilk that you still aren’t overworking the dough, you want to stir it just enough so that everything is moistened. You don’t want a smooth dough.

Make some sawmill gravy to go with your biscuits.

Once you’ve got the buttermilk stirred in, dump your dough out on a lightly floured surface. I take a plastic folding table with me when I go camping. Cleaned off, this makes an excellent surface for rolling out dough.

Once your dough is on your table, just quickly mash it together into a ball. It doesn’t have to be perfect. Again, don’t overwork it, and try not to handle it with your hands too much so that you don’t heat it up.

Roll it out into a 3/4 inch thick circle and cut out your biscuits with your biscuit cutter. Once you’ve cut out all you can, bunch the dough back up, roll it back out and cut more.

When cutting your biscuits, just push the cutter straight down. Don’t twist and turn it. That’ll pinch the sides down.

Drop your biscuits in your dutch oven with a little space in between, and you’re all set.

If you’re using a deep dutch oven instead of a standard one, you’ll have some difficulty getting the tops golden brown due to the space between the lid and the biscuits, but they’ll taste just fine.

Remember, about every four or five minutes while you’re cooking, turn the dutch oven a quarter turn, then turn the lid a quarter turn. This helps prevent hot spots from the charcoal. 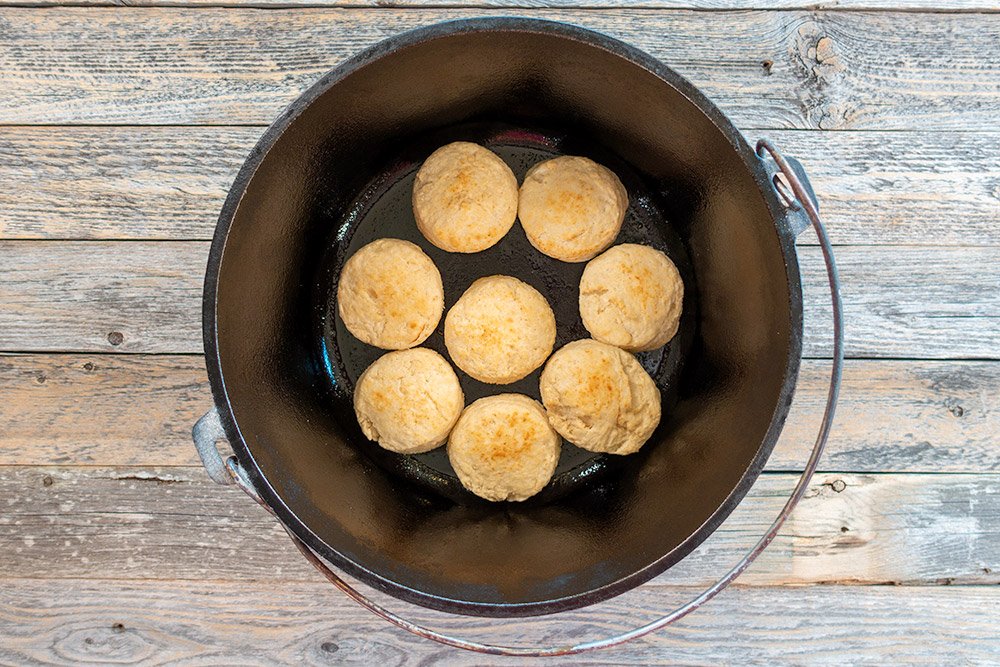