Chicken and dumplings is a meal of humble origins in the South, with the dumplings being added to chicken soup to cheaply make the meal more filling and add some needed carbs to the diets of laborers.

Adding cream to it isn’t so traditional, but it makes it taste even better. If you’d like a more traditional version of chicken and dumplings, you can leave it out altogether. It’ll still taste excellent.

Just add some milk to the dumpling dough instead of cream.

When making a simple recipe like this, the quality of the ingredients matters a great deal. If you use homemade chicken stock, it’ll absolutely elevate this meal.

Store-bought chicken stock is just chicken-flavored water. Homemade chicken stock has a far superior flavor and is loaded with nutrients.

Just remember, if you’re using homemade stock, it typically won’t have any added salt. You’ll need to add a little more to the recipe to make up for it.

It also prevents waste. The chicken comes with its own oil. No need to pay extra.

Making The Dumplings for Your Chicken and Dumplings

There are as many dumpling recipes for chicken and dumplings as Southern cooks.

Do you prefer them flat, or round? Do you include cornmeal, or is it more like a biscuit?

I grew up on drop dumplings that are made similar to biscuit dough, so that’s what I’ve included in this recipe.

You can always change it up and experiment how you like.

If you’re in a hurry or just don’t feel like making dumplings, you can use canned biscuits. Use the cheap ones, not the fancy layered ones. Just cut them into quarters and drop them in the soup when the recipe calls for them.

Canned biscuit dumplings may feel like cheating, but they’re still good. So, who cares?

Use them if you want to put dinner on easy mode. Nobody will know. 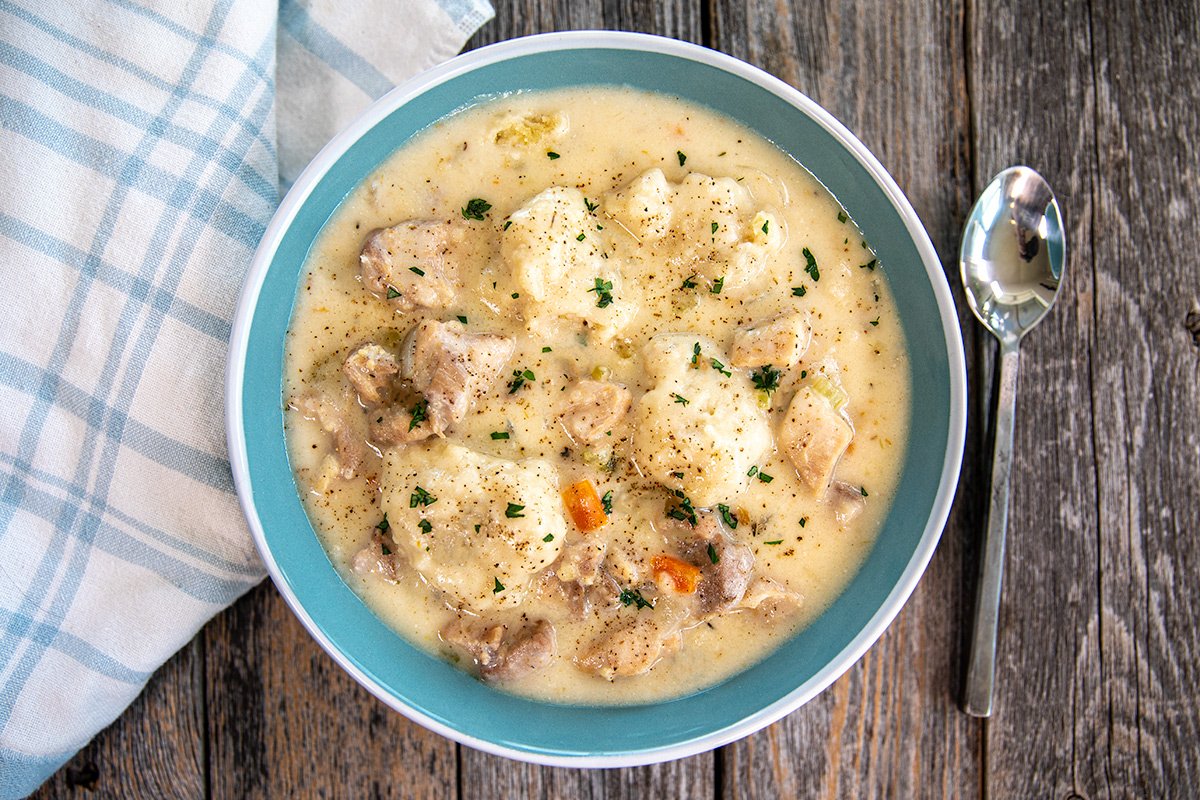 Finishing Your Chicken and Dumplings

Creamy chicken and dumplings shine with plenty of freshly ground black pepper.  I’m always sure to have a pepper grinder at the table if guests want to add more.
Tried this recipe?Let us know how it was!
Share
Pin
Tweet