I call it East Texas Jambalaya, but it’s really Louisiana Cajun Jambalaya with sausage from Central Texas with its German and Czech roots, rather than Andouille sausage. It’s what was available to me when I lived in the German belt in Central Texas. It’s also my favorite style of sausage, so I step away from tradition a little bit here, but not that much.

At any rate, this is a tradition in my house. I can make a giant vat and feed an army without a lot of hassle.

I got hooked on jambalaya when I was in high school and lived in a small town called Giddings, Texas (a historically German and Czech community), on Highway 290 between Houston and Austin. A Cajun family had moved to town and opened up a restaurant called “Jambalayas.” So, of course, jambalaya was featured on the menu, along with other fantastic Cajun foods, like crawfish etouffee.

It was, hands-down, my favorite place to eat in that town. I think, unfortunately, they’ve closed down since then. If the owners opened up anywhere else, I’d like to know. They made the best gumbo I’ve ever eaten. I’d drive across the state and buy it by the bucket full if I could.

Later in life, when I did some work in far East Texas, I pretty much lived in any restaurant that featured Cajun Food. There ain’t much better than that.

I’m absolutely certain that cold beer and spicy Cajun food will be prominently featured on all the menus in heaven.

Making Your Chicken and Sausage Jambalaya

First, let’s talk about mise en place. Mise en place is French for “everything in its place.” This recipe uses a lot of ingredients, and to cook them all properly, those ingredients have to go in the pot at different times and be handled in different ways.

If you just throw everything in the pot at one time, it’ll end up being a big gummy mess.

If you have everything chopped and laid out in the proper order, it’ll be a breeze to get through the recipe.

If you chop everything up before you begin, then group it together as laid out below, this recipe is super-easy.

Now place the bowls in the order set out above next to your stove. All you’ll have to do while you’re cooking is reach over and grab what’s needed, as it’s needed—no running around the kitchen.

Cutting to the Proper Size

When chopping your ingredients, it’s essential to cut them to the proper size.

I know all the pictures of Jambalaya on the internet show giant disks of sausage in them. It photographs well that way. Do you really want a huge mouthful of sausage, though?

If you cut things into bite-sized pieces, the meal will be much more pleasant.

Additionally, I like to cut the vegetables in my Jambalaya into very small pieces so that they break down in the cooking process until they are almost a sauce.

As far as getting things to the correct size, try to get your chicken and sausage diced into a 1/2 inch dice and your vegetables into a 1/4 inch dice. It doesn’t have to be perfect, though.

If you like a little heat with your dinner add a little Texas-Style Chiltepin Sauce to your Jambalaya.

One final note on cooking your jambalaya. I like to use cast iron for searing the sausage and vegetables. The cast iron helps with the Maillard Reaction, which adds an amazing depth of flavor.

In addition to searing the sausage and vegetables in the cast iron, you’ll also be repeating a process called cooking until au sec. Au sec means “until almost dry” in French. You’ll be deglazing (using a liquid to help take stuck on bits off of the pot) with chicken stock, then cooking the moisture out of the stock until the vegetables start to stick to the bottom of the pot again. This concentrates the chicken flavor and caramelizes the vegetables further.

It adds a tremendous amount of complexity and flavor to the dish. 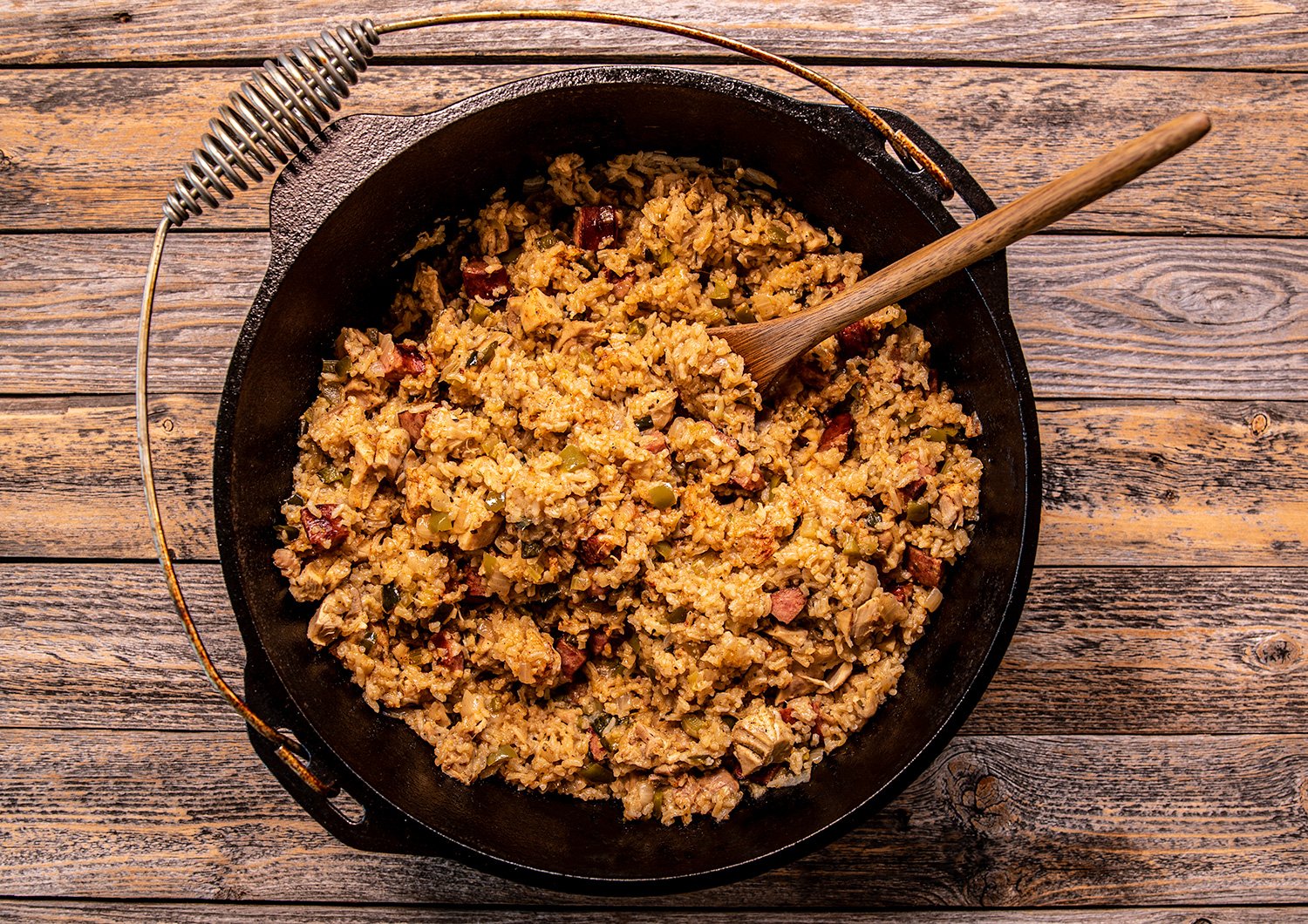 This makes a big batch of jambalaya.  I usually make a bunch of it, then freeze the leftovers for later. If you want, you can easily cut the recipe in half.
Tried this recipe?Let us know how it was!
Share
Pin
Tweet