Enchiladas Suizas, or Swiss Enchiladas, are called Swiss due to the dairy used (cream cheese, sour cream, Oaxaca cheese). Traditionally, they are one of the only types of enchiladas you’ll find in Mexico that are baked, rather than assembled and immediately served.

According to Saveur, Enchiladas Suizas originated at Sanborns Cafe in Mexico City in the 1950s.

This recipe is the perfect enchilada recipe for a hot summer day. Although it has quite a bit of dairy, the fresh green chiles and tomatillos give it a bright finish. Top it with some thinly sliced radishes and a sprinkle of fresh cilantro for an earthy pop of flavor, and it’s perfect.

How to Master Enchiladas Suizas

First, you need to roast your poblano chile peppers, then remove the skins. The best way to do this is over a gas burner or over charcoal. Just get it as hot as possible, then put the poblano directly over the flame. Continue turning it until the skin is almost entirely black all over.

If you have an electric range, you can blacken them under the broiler in your oven. Just put the rack in its highest position and preheat your broiler on high.

Once your broiler is hot, put the poblanos in a broiler pan and cook until blackened, then flip and cook the other side until it’s also blackened. About five minutes per side.

Once you’ve roasted your poblanos, put them into a bowl and cover it with a lid or plastic wrap. The steam will help loosen the skins. Once they’re cool, you can peel them.

To peel them. just wipe the skins off with your fingers or a paper towel. They should slide right off. Don’t put the peppers under running water, or you’ll lose some of the flavor.

I also roast the jalapenos in this recipe to soften them up and add an additional layer of flavor. No need to peel them, though.

I know that everybody is trying to avoid adding oils or fats to their meals these days, but this is really a step that you shouldn’t skip. If you do, the tortillas will end up mushy. The oil helps the tortillas repel some of the liquid from the sauce to better hold their shape.

To fry your tortillas, get a pan and add enough oil so that the tortillas will be lightly coated but fully covered (so they fry and don’t just get toasted). Get it hot, then fry the tortillas on each side so that they begin to brown but don’t become crispy. Once they’ve cooled off a bit, you can start rolling your enchiladas. 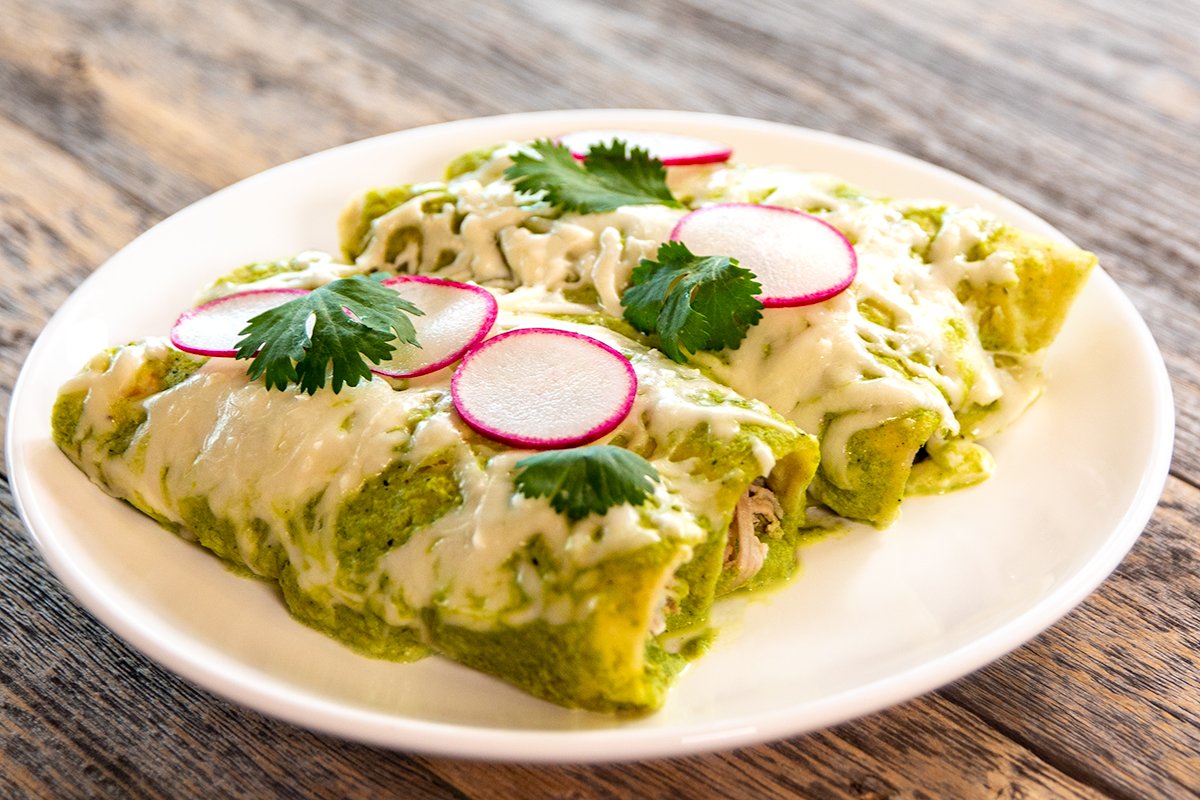