Add a Bourbon cream sauce, and you’ve got a date-night-worthy dish. The Bourbon pairs perfectly with Texas pecans and the cream will add some much-needed fat.

Texas produces from 40 to 50 million pounds of pecans a year, so be sure, when you buy your pecans, to buy local and help support Texas growers.

To prepare your pecans for this recipe, you’ll need a food processor.

You want to use the pulse function to crumble them. Just throw them in your food processor and repeatedly pulse until they are well-crumbled but not powdered.

If the chunks are too big, they won’t stick to the pork tenderloin properly, and if they’re too small, they’ll lose their texture.

When buying pork tenderloin, make sure you buy tenderloin and not regular loin. You can tell the difference by the thickness of the cut. Loin will be as much as six inches thick. Tenderloin is much thinner. If you aren’t sure, ask your butcher. If you try to substitute regular loin, it’ll likely come out as dry as sawdust.

Pork tenderloin is an easy cut of meat to work with, but you’ll need to do a bit of trimming.

First, make sure you have a sharp knife. A dull knife might make this a bit of a chore.

Second, look for the white membrane running partially down the length of the tenderloin. This membrane is called the silverskin. You’re going to want to remove it.

You don’t need to cut into the tenderloin to remove it. Just remove what’s on the outside.

To remove it, insert your knife blade underneath the end and loosen it so that you can grab it with your fingers. Once you’ve got ahold of it, begin cutting it off, being careful not to cut into the meat.

If there are any big chunks of soft fat stuck to the tenderloin, you can remove those too, but it doesn’t need to be removed entirely.

Pork tenderloin is very lean and can come out dry if it’s not prepped and cooked correctly.

The key ingredient to making your tenderloin juicy is salt.

You want to salt a couple of hours before you start cooking, so the meat has time to absorb it. Doing this will help amplify the flavor, tenderize the meat, and most importantly, help it retain its moisture during the cooking process.

To Tie or Not to Tie.

When you look at your pork tenderloin, you’ll notice that the ends are thinner than the center. This difference in thickness means that the thinner parts will finish cooking before the thicker parts.

You can solve this problem by folding the ends over and tying them in place with butcher’s twine, making them the same thickness as the center of the tenderloin.

Tying the ends like that is up to personal preference, though. I usually don’t bother. There always seems to be somebody at the table that prefers the more well-done pieces.

Cook to Temperature, Not Time

Since every piece of meat is as unique as the animal from which it came, cooking times for those pieces of meat are just as unique.

If you try to cook based on a strict time until it’s done, you’re relying on luck to get it to the proper doneness.

An instant-read thermometer fixes this problem and ensures the exact level of doneness that you’re looking for. It’s probably one of the most essential tools in my kitchen.

Forget the kitchen voodoo of pinching and poking the meat with your finger. Unless you cook dozens of pork tenderloins a day, you aren’t going to get it exactly right. You might get lucky, but probably not.

Normally it takes about 30 minutes in the oven for the tenderloin to be done, but it can take as little as 20 minutes, depending on how thick it is.

When it hits the 20-minute mark, you’ll want to test it with your thermometer. Just stab the thermometer probe directly into the center of the thickest part of the meat to test it.

You are looking for a target temperature of 145 degrees.  Yes, 145 degrees is a safe temperature (it used to be 165, but modern agriculture techniques have made this unnecessary).

If it isn’t at 145 yet, close the oven door and let it keep cooking, checking every few minutes or so until it’s done.

When it has reached the proper temperature, take it out of the oven and let it rest for five minutes.

When you slice the pork, you want to see a little bit of a pink blush. If you nailed it, the pork will be perfectly juicy and bursting with flavor.

You might think I’m crazy for slathering dijon mustard all over a pork tenderloin. Don’t worry. The flavor mellows substantially while it’s cooking.

You’ll only taste a faint hint of the mustard.

Not only will it add a subtle flavor, but it also works as the perfect glue for sticking the pecans to the tenderloin.

Trust me on this. Slather it on thick. 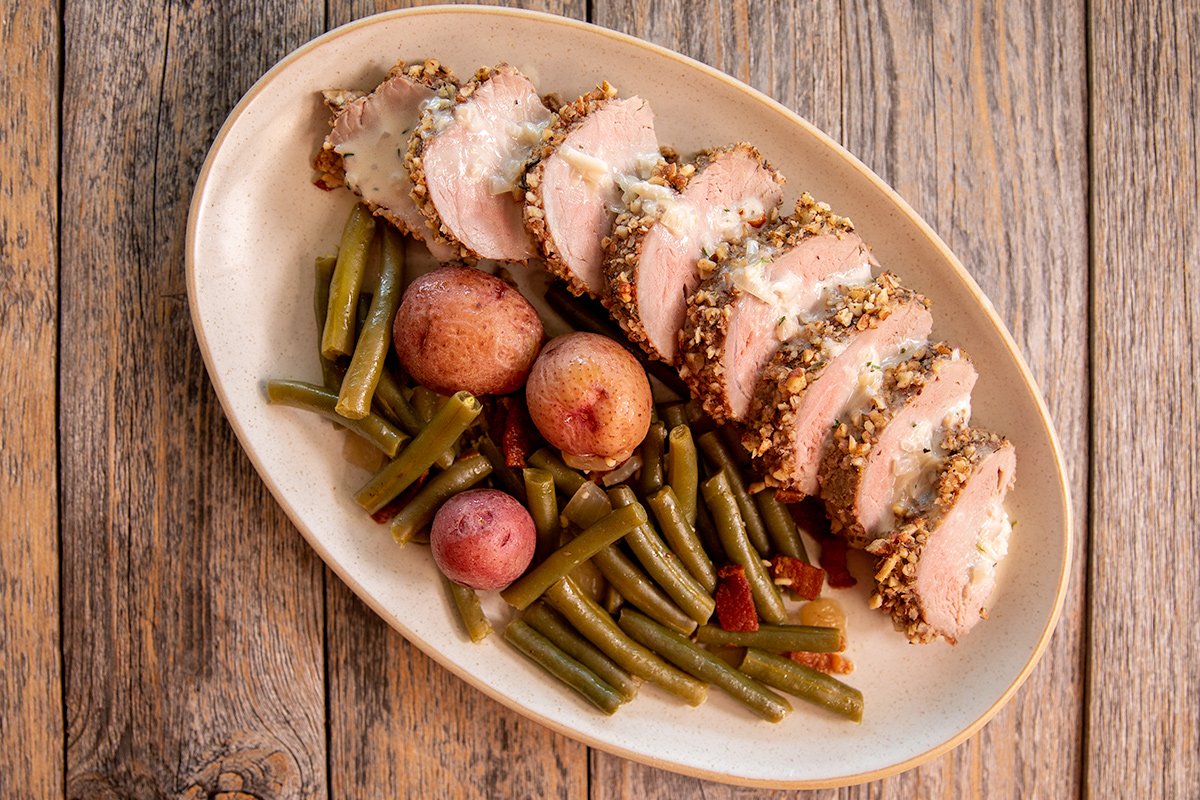