Pulled pork is one of the best things to make for a beginner to slow-smoked barbecue. A fatty pork butt is very forgiving. It’s almost impossible to mess this cut up if you follow a few simple instructions.

Pulled pork can be done much more simply than this recipe, but I think that just a few extra steps make a massive difference in the final product.

It’s worth it, trust me.

I suppose the best place to start is to understand the cut of meat. A pork butt (sometimes called a Boston Butt) is not actually a pig’s ass. It’s a pig’s front shoulder, as you can see in the image below.

You should be sure that, when you buy your pork butt, the shoulder blade has not been removed.

The day before you plan to cook your pork shoulder, you’re going to want to get it trimmed up.

Trim almost all of the fat off the pork’s surface, leaving no more than 1/8″ on any part. Only on the outside, though. You don’t want to separate any of the muscle fibers. All of that internal fat will melt into the meat.

TIP: Save the fat and freeze it to use later. Rendered pork fat is an excellent base for many things (frying, gravies, etc.).

Now, you’re going to want to tie the meat with butcher’s twine. It doesn’t need to be pretty—no fancy French technique required here. You just want it tied well enough that the meat doesn’t fall apart later when you try to move it.

It’s also helpful to try to tie it so that the shape of the pork butt is uniform. This will help it cook more evenly.

Finally, you are going to want to salt the meat. This is best done 12 to 24 hours before you put the meat in the smoker.

Evenly sprinkle on about 1/2 a teaspoon of salt per one pound of meat. I always use Morton’s Coarse Kosher Salt in my recipes unless I say otherwise.

This salting step is called dry-brining. It will help make the meat more juicy and tender once it’s cooked.

Put your pork butt in a pan, cover it with plastic wrap, and stick in the refrigerator overnight.

Setting up in the Morning

The next morning you might want to get up early depending on when you’re planning on eating. You can expect your cook to take seven or eight hours. Maybe more.

(Remember, it’s easier to hold your meat for a while in the oven at 170 degrees than it is to speed up the cooking process.)

The first thing you’re going to want to do in the morning is to rub your meat.

I start by slathering it with mustard. I like mustard because it’s water-based, which helps dissolve the rub, and it’s sticky, which helps to hold the rub on the meat.

It won’t add a lot of flavor to your pulled pork, but it’s my favorite medium for holding the rub onto the pork.

Next, you need to add your rub. Remember that since you dry-brined the day before, you want a rub without any added salt. You can use our Pork Rub Recipe (see below) or any other rub you like, as long as it doesn’t have any salt.

Sprinkle enough so that the pork butt is well covered, but not heavily caked.

Cover and leave out on the counter at room temperature while you get your smoker set up.

Get your smoker set up to cook at 225°. If you are using a regular grill, get it set up for indirect cooking. If you use a pellet grill like me, turn it on and have a beer.

Add some wood chips or chunks to the fire. Since I use a pellet grill, I add a smoke tube filled with pellets. I usually use apple wood for my pulled pork recipe.

Put the meat on the smoker on the indirect side away from your heat source, directly on the grill. You don’t want it sitting in a pan, or a crust won’t form on the bottom.

Close the lid on your grill, and don’t open it for one hour. Remember, if you’re looking, it ain’t cooking.

While it’s cooking, prepare a solution of 1/2 cup apple juice and 1/2 cup apple cider vinegar and put it into a clean spray bottle. I prefer a spray bottle to a mop because I don’t want to mop the rub off of my butt.

After cooking for one hour, spritz generously with your apple juice/apple cider vinegar solution. Spritz again every half hour until your meat hits the stall (around 150-160°).

Once your pork butt has hit the stall, take an aluminum pan and line it with heavy-duty aluminum foil, as shown in the picture below. The strips of foil should be long enough to fully wrap around your pork butt.

Add 1/2 cup of apple juice, place your pork butt in the middle of the pan, and wrap it firmly with the foil.

Place the pan and foil-covered pork butt back into the smoker and reinsert your temperature probe.

Pull the pan off the grill and pull back the foil from the pork butt. Remove the pork from the pan and foil and place it directly on the grill. Reinsert your temperature probe. Cook until the internal temperature hits around 203°, or until the shoulder blade bone easily turns in the meat and pulls out with little to no resistance. Be careful, it will be hot. A pair of heat resistant gloves will help (waterproof ones are VERY beneficial here).

Toss out the foil that you had your pork butt wrapped in, but reserve the liquid left from the pork and apple juice. You’re going to want to keep that for later. I usually leave it in the pan and stick it in an oven set at 170° to keep it warm.

Take the meat off of the grill, cover with foil, and let rest on the counter for a least half an hour.

If you need to hold it at temperature for longer, you can loosely cover it with foil and put it in the oven at 170° until you’re ready to eat.

How to Pull Your Pork

You can use a pair of forks, some meat claws, or chop it with a knife.

I think pulling with forks or claws make for the best texture.

If you’re feeling lazy, you can throw chunks into your stand mixer with the paddle attachment and turn it on low for a few seconds. You can pull an entire pork butt in just a couple of minutes this way. Just be careful not to mix it too long, or it’ll turn into mush.

After you’re done pulling your pork, thoroughly mix in the liquid leftover from being wrapped in the foil earlier. The meat should easily absorb all of it.

To assemble your pulled pork sandwiches, I recommend the following items:

A step that I think is really important is to butter and toast the hamburger buns. It makes a big difference.

Just slather on some room temperature butter and toast them in a hot cast iron pan or under the broiler in your oven. Not only will it taste better (butter makes everything better), but it will also help keep your hamburger buns from falling apart.

Put a good pile of pulled pork on the bun, add some barbecue sauce, a pile of coleslaw, put on the top of the bun, and you’re all set.

Alternatively, instead of coleslaw, you can just use pickle slices and some thinly sliced red onions. I highly recommend using coleslaw, though, even if you think you don’t like it.

If you end up with a bunch of leftovers, try our Leftover Pulled Pork Green Chile Enchiladas. 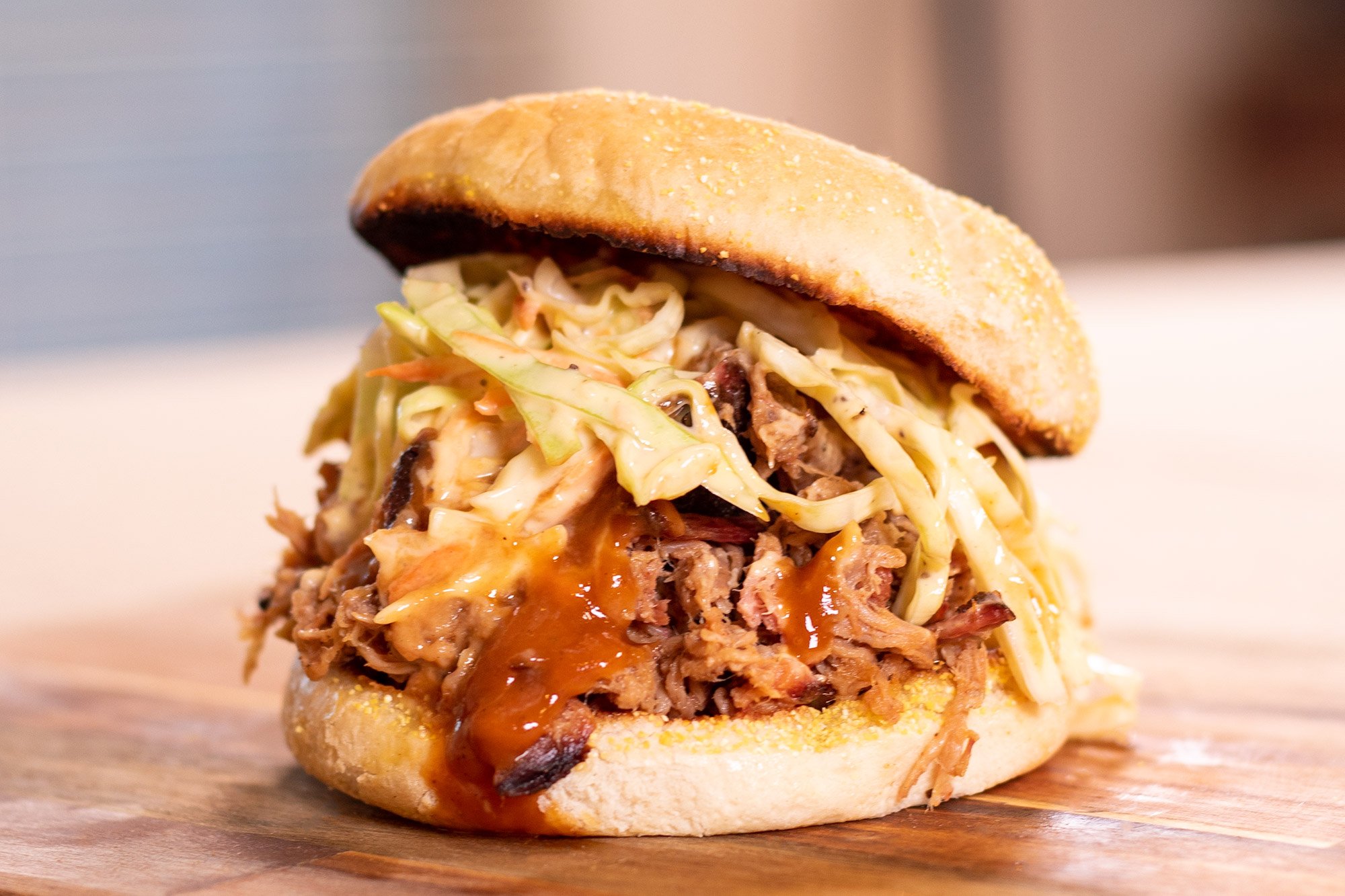 Pulled pork is one of the best things to make for a beginner to slow smoked barbecue. A fatty pork butt is very forgiving. It’s almost impossible to mess this cut up if you follow a few simple instructions and pulled pork sandwiches are what dreams are made of.
5 from 6 votes
Print Recipe Pin Recipe
Prep Time 30 mins
Cook Time 10 hrs
Dry Brine 12 hrs
Total Time 22 hrs 30 mins
Course Main Course
Cuisine American
Servings 10 sandwiches