Enchilada night for us always consisted of stacked enchiladas piled high on a screaming hot plate that would burn a blister on your forearm if you accidentally touched it.

Yes, they were baked right on the plate. The blisters were worth it, though. They were probably my favorite meal my mother made when I was growing up.

Don’t worry, you won’t have to manage a screaming hot plate with this recipe, but you’ll have to manage to transfer the stacked enchiladas from a hot baking pan to a room temperature plate. A nice wide spatula will get the job done.

The Old Borunda Cafe in Marfa, Texas is considered by many to be the first Tex-Mex Cafe in history, being opened in 1887 by Tulia Guiterrez.

Old Borunda is generally credited for the well-known Dinner #1. The everpresent Tex-Mex enchilada, taco, tamale combination with rice and beans on the side.

Old Borunda was a favorite dining spot for James Dean and some of his crew when they were out in West Texas filming Giant.

According to Recipes 4 Rebels, the only thing on the menu of the Old Borunda Cafe at the time of Dean’s filming was Enchiladas Montadas. It came with a side of beans and tamales.

No alcohol was served. You were allowed to bring your own beer, but no more than two.

What Are West Texas-Style Enchiladas?

You’ll also find quite a few more green chiles in the New Mexican version than you generally find in the West Texan one.

Being from a majority Mexican community deep in West Texas, our food was more Mex-Tex than Tex-Mex. Chile gravy wasn’t that common out there.

As far as the red enchilada sauce goes, the one I make, with cloves and a pinch of cinnamon, is more common in the state of Colima, Mexico (West of Mexico City), rather than Northern Mexico. I don’t know how it found its way into my kitchen, but it did.

Maybe one of the families that we spent so much time with early on was from Colima. If you want a more authentic West Texas flavor, you can omit the cinnamon and cloves.

Below are a few tips for mastering stacked enchiladas:

If you want to make your own fresh roasted chiles, just char them over a flame until they’re completely blackened, then put them in a bowl and cover with plastic wrap until they’re cool.  Peel off the blackened skin, remove the stem and seeds, then dice into a 1/8-inch dice.

If you don’t have a gas stove, you can blacken your chiles by roasting them on the top rack under your broiler (set on high and preheated for at least 10 minutes) for 4-5 minutes per side.

You get bonus points if you char your green chile over charcoal or, even better, a wood fire. The smoky flavor will make your enchiladas even better. 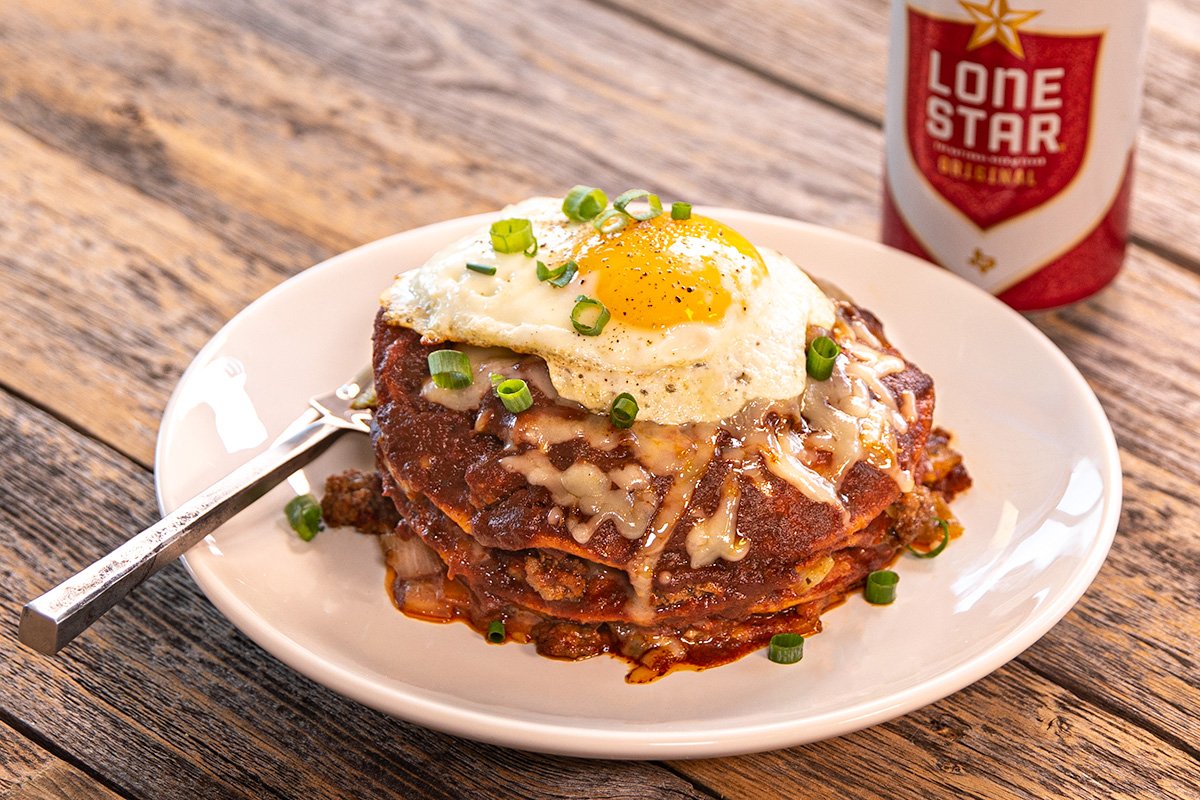 See note above for roasting fresh green chiles.
Tried this recipe?Let us know how it was!
Share
Pin
Tweet