The quintessential Tex-Mex recipe in virtually every Tex-Mex restaurant in the state is the cheese enchilada plate. It’s generally the first recipe that comes to mind when you ask a Texan to tell you what Tex-Mex food is.

You’ll likely find it as Dinner #1 on the menu at your neighborhood “Mexican” restaurant.

The Tex-Mex cheese enchilada plate certainly isn’t Mexican, but Texans of Mexican descent absolutely invented it. They invented it specifically to appeal to the Southern Anglo palate and they were so successful that they launched an entire cuisine of their own with worldwide appeal.

In creating this new cuisine, they understood that brown gravy was a staple for Southerners, as well as orange cheese. (Cheddar is an English cheese that’s dyed orange to differentiate it from Mainland European cheeses.)

Southerners like a good melting cheese, though, and the oil in Cheddar tends to separate when heating it. This preference for liquid orange cheese is where Velveeta (or American) cheese came in.

Finally, instead of just sticking with the typical brown gravy you’d find on a Southerner’s dinner table, they added dried chile peppers to the brown gravy, then poured it over that molten orange cheese wrapped in a fried corn tortilla, and viola, what everybody knows today as Tex-Mex cuisine was born.

Sometimes a little shredded iceberg lettuce and some diced tomatoes (at the fancy joints, some pico de gallo) are piled onto the plate to add a bright crispiness.

If you want to learn more about the history of Tex-Mex cheese enchiladas and how they came to be, the best resource you’ll find is The Tex-Mex Cookbook by Robb Walsh.  Walsh did such an excellent job with his Tex-Mex history/cookbook, there isn’t much more to say on the subject.  Just read his book and you’re done. No need to buy another.

His book ought to be on every Texas cook’s bookshelf.

My Version of Tex-Mex Cheese Enchiladas

Now, with my version of Tex-Mex cheese enchiladas, I don’t necessarily stick to what you would historically find in a Tex-Mex restaurant.

I don’t really like Velveeta-style cheese. It’s too salty for me. Instead, I use Longhorn Colby cheese. It melts better than Cheddar but doesn’t have the saltiness of Velveeta.

If you want to use Velveeta in yours, by all means, do it. Just substitute a like quantity of Velveeta for Longhorn Colby and you’re all set. You don’t need to change anything else. 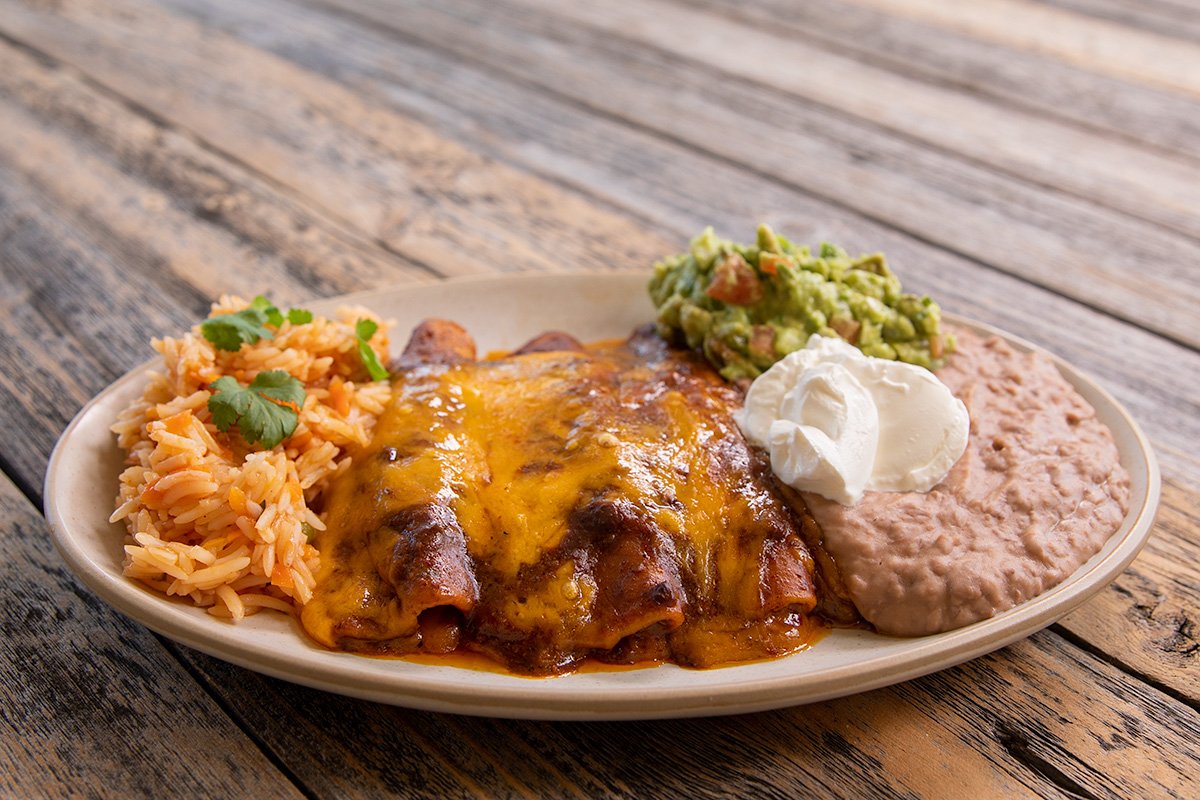 Be prepared to have a messy kitchen and hands.
Tried this recipe?Let us know how it was!
Share
Pin
Tweet