Tex-Mex style migas are an early morning Austin tradition. Chances are, if you’ve visited the city and partaken in some of their food truck fare early in the morning, you’ve had the Tex-Mex mutation of migas that Austinites, and many across Texas love so much.

You’ve almost certainly had them if you’ve found yourself waking up after experiencing the Austin nightlife and asked one of the locals to point you in the direction of a hangover remedy.

What are Tex-Mex Migas?

I want to start by saying that, contrary to popular fiction, migas weren’t invented in Austin by a bearded guy with a food truck and a $200 pair of skinny jeans.

However, Austinites have embraced migas in a big way and have played a major role in popularizing them across the United States.

Migas were originally a Spanish (or, potentially, Portuguese) dish that made its way to Mexico, then eventually the U.S.

In Spanish, the word ‘migas’ means crumbs, which is at the root of what migas are.

Mexican migas are, like most great recipes, at their root, peasant food. They were a way to use up stale tortillas leftover from the previous day. They’re similar to chilaquiles in that way, except, instead of salsa being mixed into the tortillas, migas make use of scrambled eggs, and are then topped with salsa rather than having it cooked in.

The Texas version begins with Mexican-style migas, then throws everything but the kitchen sink at it, from sour cream to avocado slices. That kitchen sink also generally includes Cheddar Cheese, a British-style aged cheese (Mexican cheese is typically white).

All of those extra ingredients are definitely not peasant food.

Texans also like to stuff their migas into additional corn or flour tortillas to make tacos out of them. Traditionally, migas are eaten like you would a plate of scrambled eggs, not as a taco.

Pointing out those contrasts to the traditional is not to say that I don’t like Tex-Mex migas. I do—a lot. What can I say? I’m a Texan. I like Tex-Mex food.

Credit should be given where credit is due. Migas are a traditional Spanish/Mexican dish that have worked their way into the Tex-Mex food scene.

How to Nail Your Migas

They end up getting soggy and turning everything into a textureless pile of mush.

If you absolutely must use store-bought, buy the thickest ones you can find and make sure they’re made entirely of corn, not wheat flour.

Second, don’t throw all of the tortilla chips in at once. Save some to throw in toward the end to add a satisfying crunch to your migas.

Third, if you’re going to make tacos out of your migas, be sure to toast your tortilla wrappers before you cook your migas. Migas should be served right after cooking so that the tortillas that you’ve cooked into the eggs don’t get too soft. You don’t want to delay the party by having to toast tortillas after the migas are ready.

Finally, there is no right or wrong way to make Tex-Mex migas. In the case of this particular recipe, there are quite a bit of peppers and onions. If you want it to be more “eggy,” either reduce the amount of vegetables or increase the number of eggs. 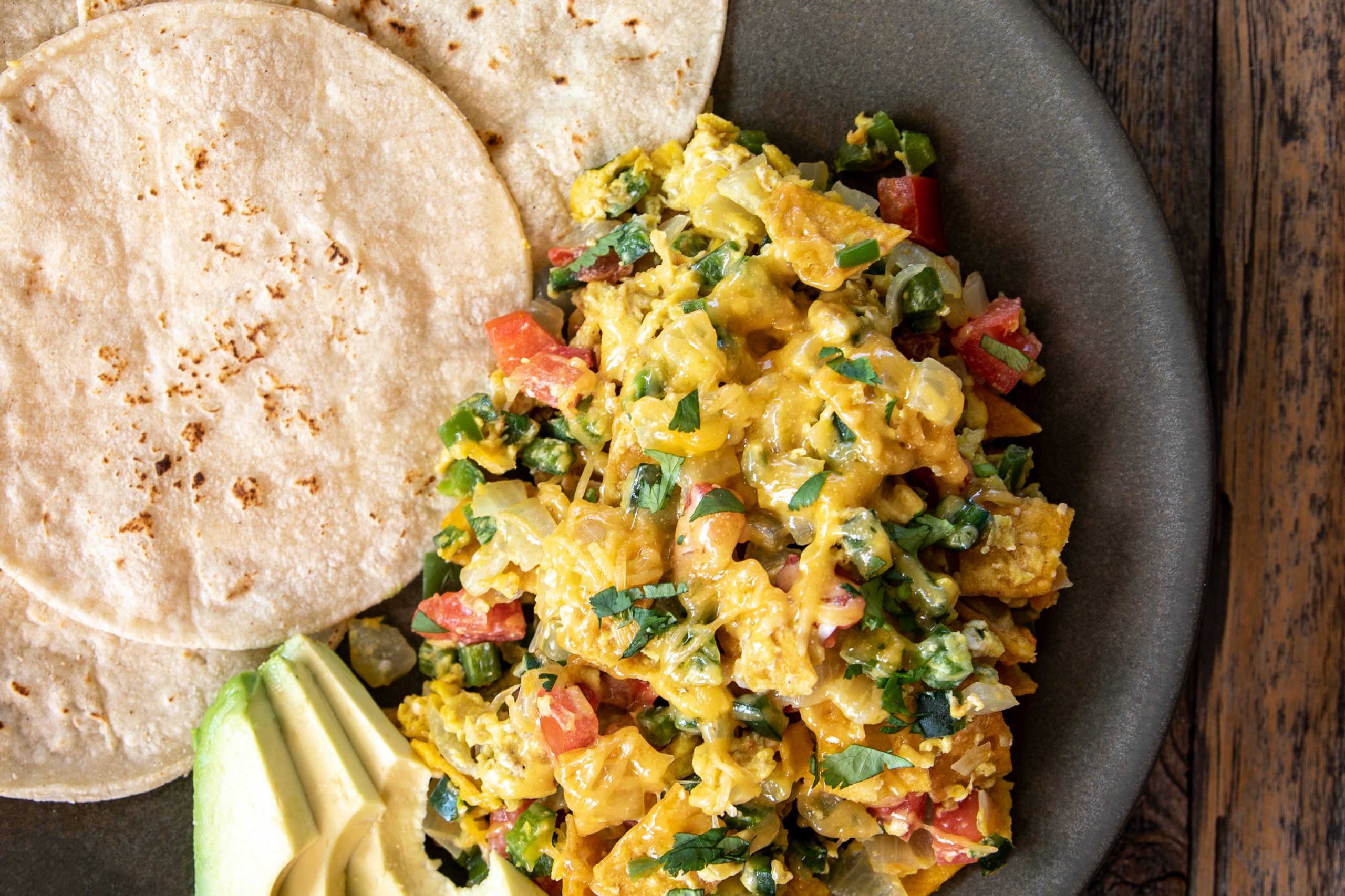 If you don’t have any stale tortillas to fry into chips, just leave some on the counter for a few hours prior to frying them. When choosing a salsa to go with your migas, I recommend a spicy, cooked salsa.  My favorite is salsa de chile cascabel because it adds a nice toasty and nutty flavor that won’t blend into the background of the peppers and tomatoes in the migas.
Tried this recipe?Let us know how it was!
Share
Pin
Tweet