My grandparents on my father’s side lived in a house in the center of Pecos, Texas, before the late 1980’s when they moved to Lubbock to be near their kids. My granddad kept chiltepin plants in his garden outside his front door.

I used to watch him pick the chiltepins off the plant and pop them in his mouth. I had no idea how hot they were back then because he wouldn’t let me have any.

I think the inside of his mouth had to be made out of leather to eat them like that.

He would also make a vinegar sauce out of them to put on his breakfast eggs in the mornings. Fresh chiltepins are hard to find at the store nowadays, but the dried ones also work great for this sauce.

Below is the language of the designation of the chiltepin as the Official State Native Pepper of Texas:

WHEREAS, The Lone Star State’s reputation as a haven for lovers of hot and spicy food is well deserved, and the native chiltepin pepper has contributed greatly to this proud legacy; and

WHEREAS, A member of the genus Capsicum, the chiltepin grows wild in our temperate climate and is both undeniably American and typically Texan; its distinctive flavor makes it ideal for hearty stews and red-hot Texas chili, and it is a staple in many Tex-Mex favorites; and

WHEREAS, Even the mockingbird, our state bird, recognizes the appeal of this piquant pod, choosing to dine on it almost exclusively when the pepper is in season; wild turkeys, too, are often seen feeding on these tasty little morsels, and these and other fruit-eating wild birds play a vital role in the chiltepin’s proliferation; and

WHEREAS, Found in abundance from the southern United States to northern South America, the chiltepin has been used for many years by the various peoples who have populated our great state; known variously as chile mosquito and chile bravo, the Spanish described this zesty fruit as “arrebatado,” meaning that although its spiciness is immediate and intense, this bold sensation does not linger long; and

WHEREAS, The chiltepin is used in both fresh and dried forms, combined with vinegar to make a tangy sauce or sprinkled into soup to provide just the right seasoning; perhaps the most amazing attribute of this indigenous spice is that it has been shown to increase the human metabolism by as much as 25 percent, making it a promising means of controlling weight gain; and

WHEREAS, The chiltepin’s storied history even includes a footnote to one of our greatest American presidents, Thomas Jefferson; an avid gardener, President Jefferson acquired some of these exotic tiny peppers from a fellow horticulturist and displayed a keen interest in establishing a market for this Texas pepper; and

WHEREAS, It is important to acknowledge and promote our endemic natural resources, for they are an integral part of our heritage and help to make us recognizable to other cultures around the globe; the chiltepin is Texas’ only native pepper, and its long history and wide variety of uses make it truly deserving of special recognition and endorsement; now, therefore, be it

RESOLVED, That the 75th Legislature of the State of Texas hereby declare the chiltepin the official State Native Pepper of Texas. (link) 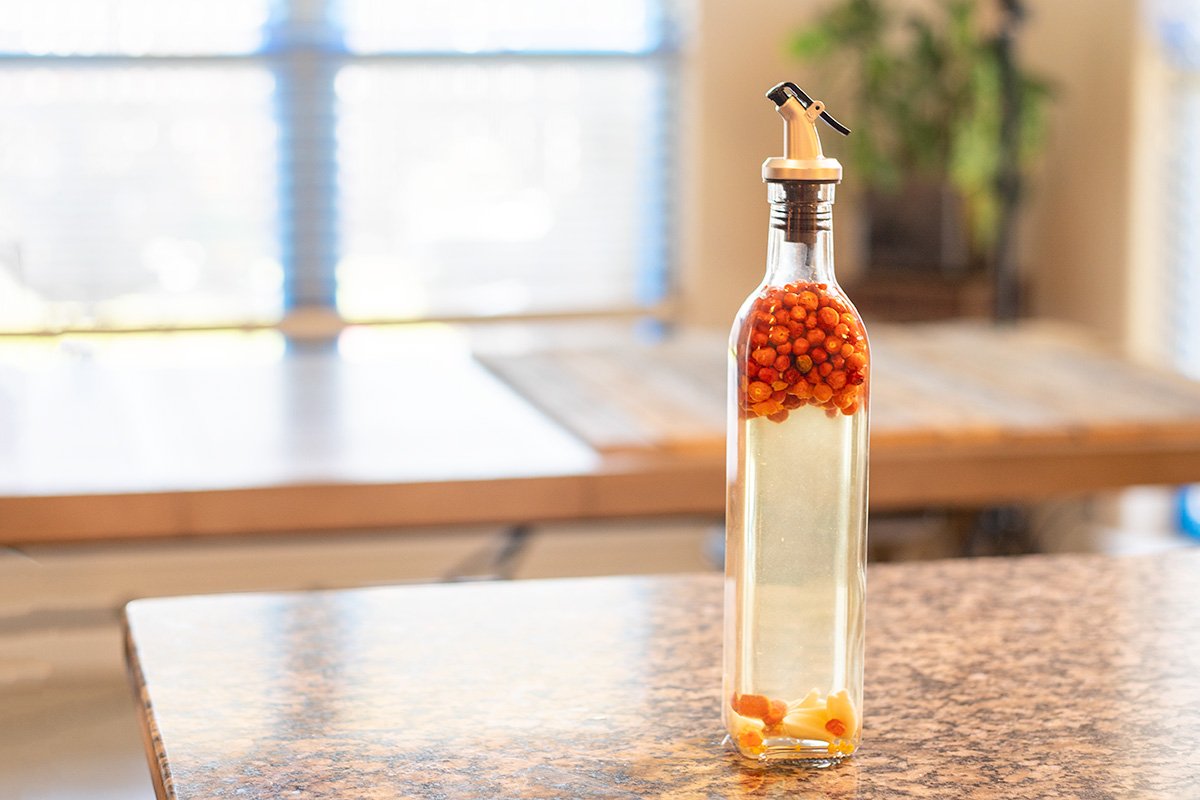 You can top your bottle of chiltepin sauce off with more white wine vinegar as it starts to get low if you like.  I’ve found that I can do this a couple of times before it starts losing its potency and I need to order new peppers.
Tried this recipe?Let us know how it was!
Share
Pin
Tweet