There is no end to “takes” and “spins” on guacamole, but traditional guacamole is a tradition for a reason. It’s the perfect side for almost any dish or just for a chip dip. It neither overpowers the dish nor is it a flavorless, textureless blob on top.

The creaminess of the avocados is perfectly offset with the acidity of the tomatoes and a splash of lime juice, and the cilantro and serranos add the garden freshness that balances it all out.

What’s important about guacamole is the texture. It should neither be too creamy nor too chunky.

The trick to making it just right is to leave the fancy new gadgetry in the pantry and break out the molcajete.

How to Make Traditional Guacamole the Right Way

To start, you want to soften up the garlic and cook some of the raw taste out of it. You can do this by toasting it on a comal or use a little trick I learned from following Rick Bayless. Put the whole cloves in a small plastic container with just enough water to cover, then microwave it (with the lid to the container on, loosely) for one minute.

The garlic comes out perfect every time.

After your garlic is ready, squeeze it out of its skins, into your molcajete, then toss in your cilantro, two tablespoons of finely diced white onion, and your diced serrano peppers.

Once everything is piled into your molcajete, smash it into a paste. It doesn’t have to be perfectly smooth, but it needs to be broken down very well.

By smashing it into a paste, you open up all of the cell walls and maximize its flavor. It’ll never taste that good by just chopping it.

Next, cut your avocados in half and remove the pits. Throw them and the kosher salt into the molcajete and smash them with a fork, being sure to mix them and the paste very well.

Next, cut your tomatoes into quarters long-ways. Using a spoon, scoop out the seeds and discard them. If you leave them in, your guacamole will be watery.

After you’ve removed the seeds, dice the tomatoes into a very small dice. No bigger than a quarter inch.

Stir the tomatoes, along with the reserved white onion, and one tablespoon of lime juice into your guacamole. 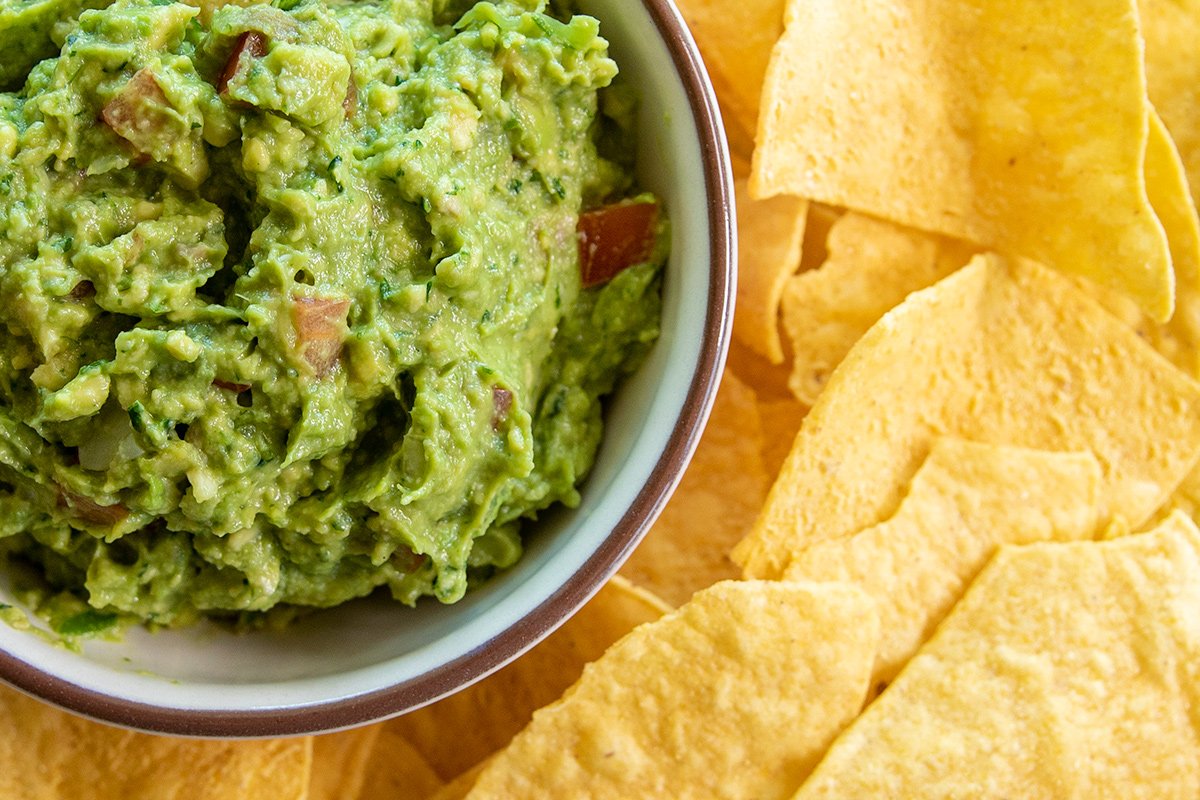 There is no end to "spins" on guacamole, but traditional guacamole is a tradition for a reason. It's the perfect side for almost any dish.
4.89 from 9 votes
Print Recipe Pin Recipe
Prep Time 5 mins
Cook Time 10 mins
Total Time 15 mins
Course Side Dish
Cuisine Mexican
Servings 3 cups