Being from West Texas, I’d be remiss if I didn’t post a recipe for West Texas Asado. It’s a local favorite here that most people from other areas of the state have probably never heard of.

Don’t get West Texas Asado confused with Carne Asada. They’re two entirely different things. Carne Asada is meat grilled over a fire outside.  Asado is more like a chili that has pork, instead of beef, in it.

My earliest memory of eating Asado was when I visited my grandparents’ house in Barstow, Texas. A tiny town just outside of Pecos.

There was a little restaurant in an old gas station just off of Business 20. I don’t think that old gas station is still standing at this point. Anyway, they served it with tortillas and had it labeled as the “Cory Special.”

My name is Cory, so at that age, I decided it was named after me. It wasn’t, but I wouldn’t let anybody tell me otherwise. That was my name, and I didn’t know anybody else that had it, so those were my tacos.

I probably ate my body weight in Asado five times over. Who wouldn’t love a taco that was named after them?

How to Make West Texas Asado

There are probably as many versions of Asado as there are West Texans that cook it. This is simply my version.

The main thing with Asado is it uses a lot of dried chiles. People use all different kinds to make it. Anchos are the most commonly found in the versions that I’ve eaten. I’ve also had it with guajillos and pasillas.

I prefer it to be primarily anchos with a couple of chipotle moras thrown in to add some heat and a smoky undertone.

Keep in mind, though, that chipotles are dried jalapenos and will give it a kick. Remove the seeds or leave them out altogether if you want a milder Asado.

As for cooking the meat, it’s just like any other braise. You just brown the pork, then the onions, put them together in the pot, and add your chile and garlic puree. From there, you just cook it at a low simmer until the meat is tender, then thicken it up at the end with a little masa harina.

As far as the chile puree goes, all you need to do to get the flavor right is to drain them well after softening them in water. If you don’t drain all the cooking water, it can lend a bitter taste.

Finally, don’t be afraid of all the garlic. It seems like a lot, but the chiles have such a strong flavor that it takes a lot of garlic to cut through.

You’ll find, in West Texas, that some people use a contraption called a discada to cook their Asado. A discada is basically a big wok made from a tractor plow disk and generally uses propane for heat, sometimes charcoal.

It’s not necessary to have one to cook it. It comes out just fine in a cast iron dutch oven.

One variation that I like to do is smoke the pork whole in my barbecue pit using pecan wood until it hits an internal temperature of about 160 degrees, then take it off the pit and let it cool for about thirty minutes.

From there, you can dice it up and cook it in the chile puree.

If you decide to do that, it’s a good idea to exclude the chipotle peppers so that the finished product doesn’t taste too smoky. You can also cut the braising time in half. Just keep testing it until the meat hits the tenderness you want. 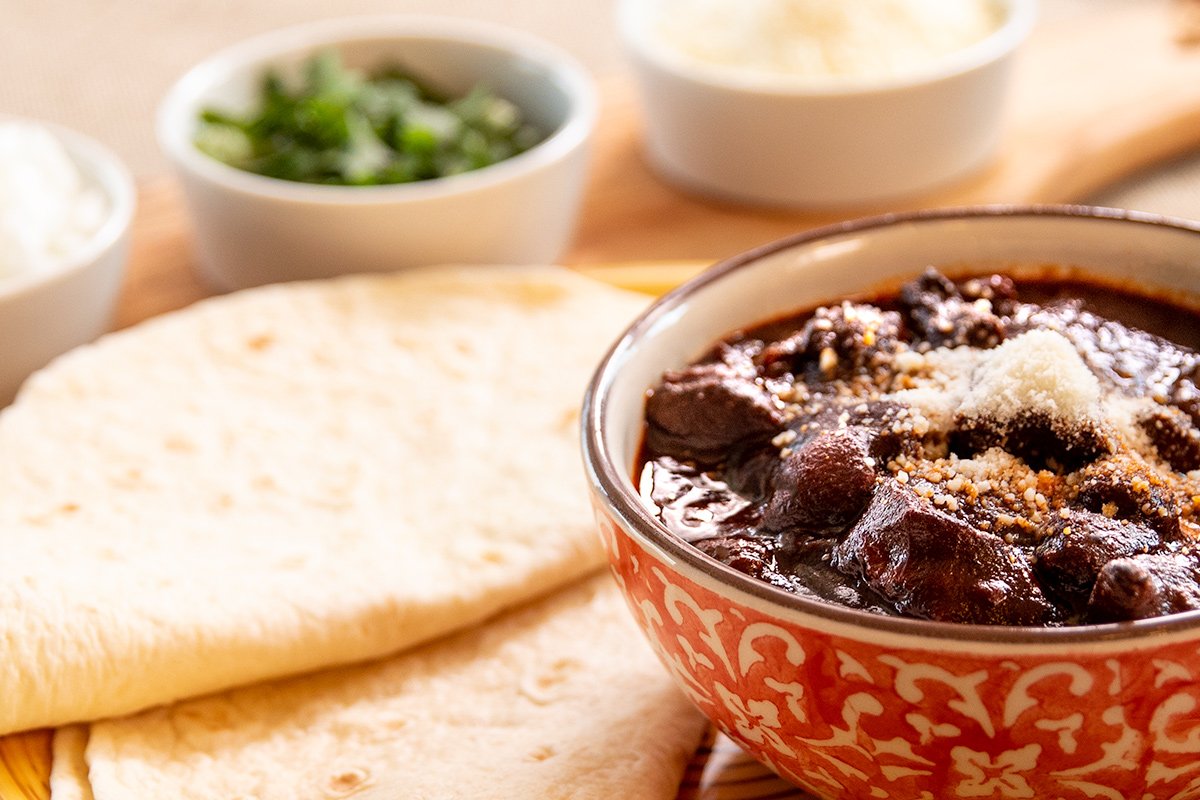