Sometimes, when you’re outside barbecuing, you just don’t want to go back inside to make a side dish. This is where “Yard Beans” come into play at my house. I can just break out my cast iron dutch oven and cook a pot of beans out in the yard.

Something about beef slow-cooking in the barbecue pit and a savory pot of beans bubbling away off to the side makes me happy. It’s just relaxing.

WHEREAS, The State of Texas traditionally has recognized a variety of official state symbols as tangible representations of the proud spirit and heritage of our state; and

WHEREAS, The bluebonnet, the pecan tree, the Guadalupe bass, and the lightning whelk are examples of some natural specimens that serve to symbolize the great diversity of the Texas landscape, while the state dish, chili, fittingly represents another aspect of our shared culture as Texans; and

WHEREAS, In keeping with this custom, the designation of the cast iron Dutch oven as the official State Cooking Implement would provide suitable recognition for this sturdy utensil; and

WHEREAS, A welcome and dependable fixture at campfires across the Lone Star State, the Dutch oven was used extensively by Spanish explorers, early settlers, ranchers, and chuckwagon cooks over the course of Texas’ history; and

WHEREAS, The Dutch oven has also remained a popular item with a vast number of Texans today, and in January, 1995, the Lone Star Dutch Oven Society was founded to promote its use throughout the state; and

WHEREAS, Ideal for use in moist-cooking methods, such as braising and stewing, the Dutch oven’s versatility has made it the food preparation implement of choice of both the Boy Scouts of America and the Girl Scouts of America; and

WHEREAS, Renowned for its portability and durability, the cast iron Dutch oven has been a cooking mainstay of Texans from the time of the pioneers to the current day, and it is indeed appropriate that it receive special legislative recognition for its role in our state’s history and culture; now, therefore, be it

RESOLVED, That the 79th Legislature of the State of Texas hereby designate the cast iron Dutch oven as the official State Cooking Implement.

For this recipe, we’ll be using a cast iron “camp” oven. This type of dutch oven has a flat bottom, flat sides, and a flat, flanged lid. The flanges on the lid are designed to prevent coals dumped on top from sliding off. A camp dutch oven also includes three legs, which hold the oven off the ground, so that it’ll stay level over coals placed underneath.

It’s the perfect tool for cooking outdoors and has been used for hundreds of years for just that. Some credit Paul Revere with adding the legs to the bottom of the pot and the flange to the lid, and Lewis and Clark were known to have carried dutch ovens with them on their expeditions throughout the West.

You don’t need a lot of equipment to cook beans in a cast iron dutch oven in your backyard. Just the basics. You’ll need a camp dutch oven, of course, a lid lifter, and maybe some barbecue tongs for picking up charcoal. It’s helpful to have a chimney charcoal starter and a lid stand, but you might be able to make do without them by improvising a bit.

The standard 12″ dutch oven (6-quart) will heat from the top more effectively since the lid will sit closer to the food (depending on what you’re cooking). Still, it won’t be as versatile since it holds two quarts less and doesn’t have the depth to handle certain cuts of meat.

If you choose to go a different route than my recommendations above, you should keep an eye out for the following three things that make a camp dutch oven so effective:

Next to the dutch oven itself, your lid lifter is the most essential tool you’ll have when cooking.

A good lid lifter is designed to both take the lid off of your dutch oven (keeping it steady, so coals don’t fall off in your food) as well as lift the dutch oven itself.

I prefer the Lodge Deluxe Lid Lifter to the standard one they make. I like the ability to grab the lid handle with the pincer built into the deluxe lifter rather than use the metal hangar on the standard lifter. It gives me just a bit more stability.

A set of long BBQ tongs are an invaluable tool when cooking with your dutch oven.

I prefer tongs over a shovel since I can grab exactly the amount of coals I want, and I don’t end up with a bunch of dirt mixed into it.

Out of the things listed above, a chimney starter is one item that you can leave behind if you’re short on space in your car when heading out camping.

It’s convenient for getting charcoal started without having to deal with a campfire, though. You can just get your charcoal briquettes going in your chimney starter and move them straight from there to your fire tray or dutch oven when they’re ready.

Unlike the chimney starter above, the Lodge Lid Stand takes up next to no space. You might as well take it along. I usually store mine inside of my dutch oven so that I don’t forget it.

The lid stand comes in handy when you’re camping somewhere that doesn’t have many rocks or wood lying around that can be easily used to create a clean, level surface for your lid.

It’s also handy in that if you turn it over, it makes a great stand to put your dutch oven lid on to fry with (the inside of a dutch oven lid makes an excellent frying pan or comal).

Since you won’t be doing any baking, you won’t have to worry about putting charcoal on top of the lid to heat from the top. You’ll just need to put some underneath to get everything simmering.

To get your dutch oven up to a boil (if you’re using a 12-inch dutch oven), about 18 charcoal briquettes underneath should do it.

A lot of variables go into the number of charcoal briquettes you use, though. A windy day can reduce the heat output of the charcoal a bit, for example. Another thing to watch for is wet ground. Moisture can sap the heat from the charcoal. Sandy or loose soil can do the same. I generally put my dutch oven on a galvanized drum lid to help prevent that. The lip on it also helps prevent embers from igniting any nearby grass.

Putting it in a firepit also works just fine.

Once you’ve got your beans up to boiling, you’ll want to remove enough coals to bring things back down to a simmer. Leave about 8-10 for a 12-inch dutch oven.

Keep in mind, beans take about an hour and a half to cook. The briquettes will only burn for about half an hour, maybe a little longer before they burn out. You’ll need to replace the coals a couple of times before the beans are done.

Using a chimney starter, it takes about 5-10 minutes for the charcoal to fully light. Be sure you’ve got fresh coals burning before the previous batch burns out. I keep a small whisk broom handy (straw bristles only) to sweep away the ash before laying down a new bed of coals. 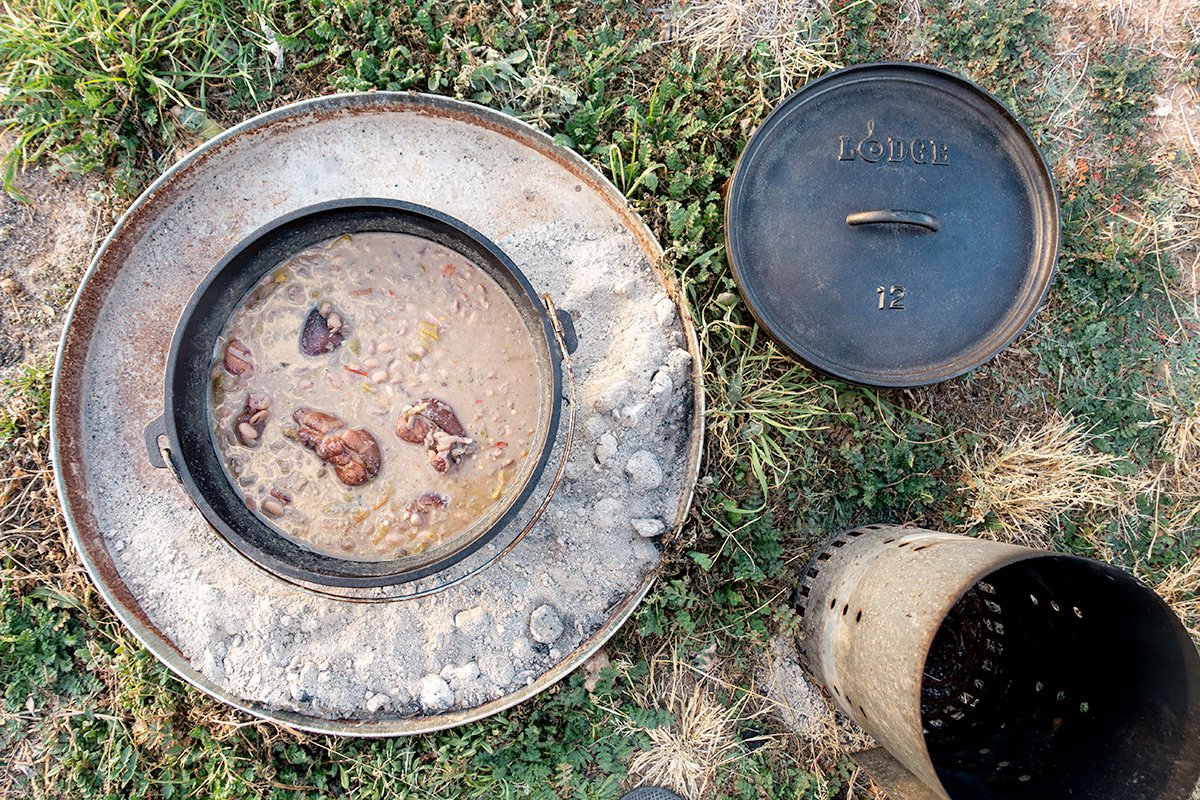 Cooking pinto beans outside in a cast iron dutch oven will keep you from having to go back inside to make side dishes when you're barbecuing.
4.91 from 11 votes
Print Recipe Pin Recipe
Prep Time 10 mins
Cook Time 1 hr 30 mins
Total Time 1 hr 40 mins
Course Side Dish
Cuisine American
Servings 9 cups

Pork hocks are salty.  It is likely that you will not need to add any salt to the beans.  If you want a lower salt version or less salt, reduce the amount of pork hocks. Beans freeze well.
Tried this recipe?Let us know how it was!
Share
Pin
Tweet